Purchase of equipment on lease and credit 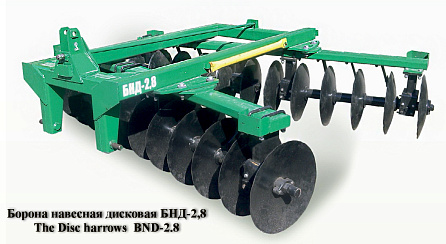 Harrows may be used in different agro-climatic zones, on all types of soils, including those subject to wind and water erosion, as well as on the soils contaminated with stones with sizes not more than 10 cm and wood waste with thickness up to 2 cm. It is allowed to use harrows on the relief (slope, degree) up to 10 degrees, also the operation is possible on soils with rolling and smooth relief, soil moisture in the layer from 0 to 16 cm – up to 35% and soil hardness in the layer from 0-16 cm – up to 3.5 MPa. It is possible to operate harrows also in wet weather.

The battery is the main operative part of the harrow. The battery includes concave discs. Discs are set on the axis which is mounted in two bearing assemblies and separated with swifts.

The harrow is designed according to the asymmetrical double-gang scheme. For its operation the harrow uses driving force of the tractor. During the forward movement of the unit the harrow mounted in working position is put deeper in the soil with its discs.

In the front row of batteries discs are installed with the convex inward, and in the back row – with the convex outward. With the sharp cutting edge the disc cuts the layer strip which is shifted to the side, lifted to the disc and falls on the field surface from some height. The soil layer thereat moves and crumbles without rotation. One section of discs throws the soil off to the right, and the other – to the left, there for leveling the field surface discs are in installed in two rows asymmetrically. During the operation the rear batteries throw the soil off in the opposite direction compared to the front ones.

The asymmetric arrangement of batteries allows to perform soil treatment not forming back furrows and back ridges, gives possibility to shift the draft line of the harrow to the side and remove the tractor from the trees at the required distance in such a manner.

You can get more detailed information and order equipment by calling: