Mineral fertilizer distributor RU-8 is on a field test 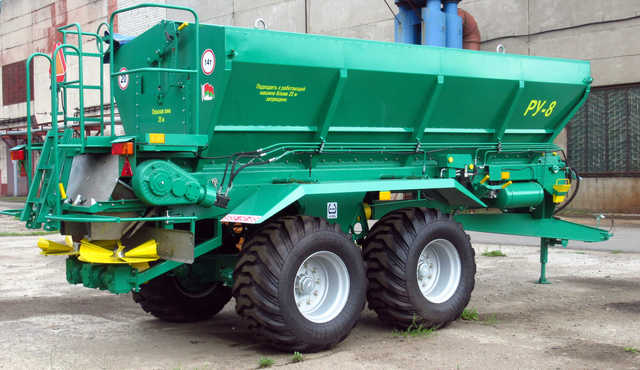 The development has been made on the base of a serial product with the purpose to expand the scope of its application due to the possibility of introducing raw dolomite as a chemical improver. The production volume of dolomite is planned to increase for agriculture needs.

Unlike dolomite flour, raw dolomite has a prolonged effect, higher humidity and lower bulk density, which objectively leads to increasing the doses of its introduction by 1,5 - 2 times. Also, developers had to solve problems connected to reduced flowability of a new product and its partial caking in the carcass.

At the same time, as known, while application of a raw dolomite there is no a cloudy, dusty plume behind the machine which is creating sometimes a local cosmic landscape with uncontrolled air spreading of a part of the chemical meliorant to the neighbor areas.

The modified design is presented by a semi-trailer transport and technological machine with increased load capacity up to 14 tons and which can be aggregated with the tractors of traction class 2 (110-150 h/p). Increasing a load capacity of 75% comparing to the base model was achieved due to the use of more advanced running system in the form of a balancing trolley on wide-profile tires, which provides high cross ability on soils with a low bearing capacity and “smooths out” road bumps. To solve this problem, a unified running system was borrowed from the new multi-tonne semi-trailers produced by Joint Stock Company "Bobruiskagromash". New unified design of the trolley is characterized by eliminated drawbacks of previous machines, such as the deformation of the balancers and the common axis. This was achieved due to the redistribution of loads and changes in the method of connection with the frame. It should be expected a positive result from unification with a proven design both from the point of view of economy of RU-8 production and in its usage. It is sufficient to note that in some cases transportation costs occupy more than 50% of all costs and are directly related to the loading of the running systems of the machines used. Taking it into account the developers created the potential reserve for tires, since the use of some models produced by JSC "Belshina" allows aggregating the RU-8 distributor at the speed up to 40 km/h.

The semi-trailer is equipped with brake pads on all wheels with pneumatic drive from the tractor as well as with the light-signaling equipment. 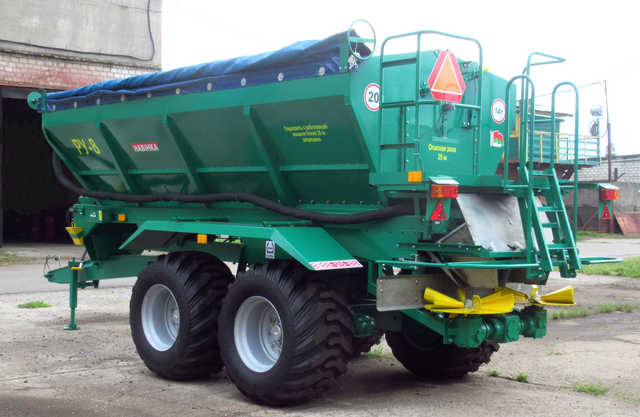 The carcass of RU-8 increased to a volume of 8 m3 has structural changes in terms of switching to one bottom conveyor with increasing its width due to the previously used two. At the same time the design of carcass was changed as well - instead of a chain-bar bottom conveyor, a chain-slat conveyor was used. With the increase of width and type of the bottom conveyor, arching in the carcass was prevented, the probability of which was increasing many times due to the normalized humidity of raw dolomite (10-12%) and as a result could lead to the shutdown of the process as when using the base model. The drive of the bottom conveyor is carried out from the tractor hydraulic system working synchronously with the working speed of the machine due to the integrated control system based on proportional-integral regulation.